Victorian Opposition Leader and Leader of the Victorian Labor Party, Daniel Andrews MLA, recently spoke to Adam Slonim and Ben Maxfield of AILD about his visit to Israel in December 2013. 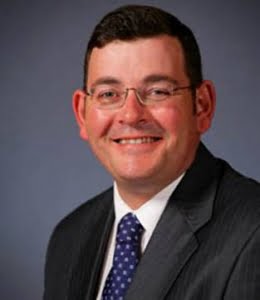 What was your motivation for visiting Israel?

It is not enough to learn about Israel from a book. You have to go there. Until I saw, with my own eyes, the modern and progressive society that Israelis have summoned from the sands of a desert, I knew I would never truly understand this land and its people. That’s why I wanted to go.

I was to lead a delegation to Israel in April last year, but a by-election in Victoria made it impossible and Labor’s Deputy Leader, James Merlino, filled my place. I made a commitment to Colin Rubenstein, AIJAC’s Executive Director, that I would go to Israel before the year’s end and it was a privilege to finally fly into Ben Gurion with my wife in December 2013.

What were the trip highlights?

The security briefings were powerful and important and the cultural experience was profound. But my highlight was our focus on health, research, agriculture and technology. This is where Israel is changing the world.

We’ve witnessed Israel’s transformation from an insular economy to a free, open and innovative society – a place built on endeavour and courage. Israel, in a word, is bold. The culture demands risk. Even if you fail, you have contributed to the vast bulk of human knowledge. That’s the untold story. That’s the wonder of Israel.

We saw Australian waxflowers blooming in the middle of the Western Negev, and being sent back to Australia. We visited the Weizmann Institute. We spent a day at Hadassah and met paediatric geneticists leading ground-breaking research – finding cures for diseases that don’t even have a name.

It was breathtaking but it was also confronting. We learnt that the entire Hadassah campus has been replicated underground. There’s always that reminder.

We were at the Western Wall on Friday, and we could hear the church bells and the call to prayer call amid the solemn hours of Shabbat. It’s like nowhere else in the world.

We also visited Sderot, a small city on the border of Gaza. I met a young woman there and I asked her what life was like. She said, ‘my reality is a rocket reality’. That’s all she’s ever known.

What do you think of the overall political situation?

We’ve seen people in the international community try and pressure Israel to fast-track a genuine resolution to meet tight and arbitrary timeframes. I don’t agree with that. There are no timelines in a timeless conflict.

What do you take away from your trip that assists the relationship between Victoria & Israel?

Our missions need to find genuine partnerships, not just partners for trade. They shouldn’t be purely transactional in nature. We shouldn’t approach Israel one deal at a time. Our friendship is more enduring than that. A partnership is a long-term venture.

Like Israel, Victoria has a natural advantage in medical research and design. We’re a similar size. We’re thinking economies. We have partnerships like VisTech, and those between Hadassah and the Alfred, and the Technion and Monash, and the Ambulance Service and Magen David Adom. I believe our cooperation can be even stronger.

If elected, Victorian Labor will take our politicians, our business leaders and our elite research units and send them to Israel. We need to better harness the potential between our two economies. That will be my priority. That’s how we build on our friendship.