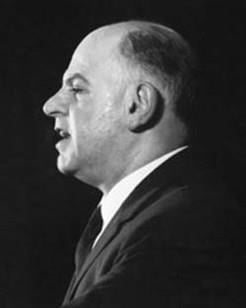 Samuel Herbert (Sam) Cohen (1918-1969), politician and barrister, was born on 26 October 1918 at Bankstown, Sydney, elder child of Max Lazarus Cohen, tailor’s cutter, and his wife Fanny Dinah, née Fagelman, both Russian born. Having spent his childhood at Leeds, England, Max had come to Sydney as a young man and married there. In 1925 he moved with his family to Melbourne, where Sam was educated at Elwood Central School, Wesley College and the University of Melbourne (B.A., LL.M., 1942). A gifted student, he achieved his education through scholarships.

At university Sam entered student life enthusiastically: he was president of the Students’ Representative Council, a founding member of the National Union of Australian University Students and active in the theatre. On 11 May 1942 he enlisted in the Militia and was posted to Major Alfred Conlon’s research section at Land Headquarters, Melbourne. Cohen was subsequently seconded to the (Australian) Universities Commission in Sydney. He was discharged as a sergeant on 29 April 1943.

Influential in Jewish communal affairs in Melbourne, Cohen was a founding member (1942) and later president of the Jewish Council to Combat Fascism and Anti-Semitism. This body became embroiled in the politics of the Cold War and many—both in the Jewish community and outside—castigated it as a communist-front organization. Cohen strenuously rejected the criticism. In 1948 he was secretary of the first United Israel Appeal. His interests also extended to Jewish welfare, the Montefiore Homes and the Friends of the Hebrew University of Jerusalem.

In 1946 Cohen had been admitted to the Victorian Bar. He practised in common law, became a specialist in industrial law and took silk in September 1961. On 3 May 1953 at the Great Synagogue, Sydney, he had married Judith Jacqueline Selig, a solicitor and niece of Rieke Cohen. A member (from 1946) of the Australian Labor Party, in 1961 he was chosen for a safe position on Labor’s Victorian ticket for the Senate in preference to Maurice Ashkanasy. Cohen took his seat on 1 July 1962. His political opponents tried to ambush him by instigating a debate in the Upper House on 18 October on the persecution of Jews in the Soviet Union: Cohen’s response resulted in widespread controversy.

Skilled, persuasive and eloquent, he soon made his mark in the chamber where he became party spokesman on education, legal issues and matters relating to science, radio, television and culture. In 1962-63 he was prominent on the much-publicized Senate select committee on the encouragement of Australian productions for television. Elected deputy-leader of the Opposition in the Senate in 1967, Cohen was appointed shadow minister on education, science, communications and the arts. He served as a council-member of the Australian National University and as an executive-member of the Commonwealth Scientific and Industrial Research Organization. That year, at the University of Western Australia, he delivered the Curtinmemorial lecture, ‘Education in the 1970’s’, in which he laid the blueprint of the education policy later implemented by the Whitlam government. Cohen played a crucial role in the A.L.P.’s policy change to assist all schools on the basis of need.

An ebullient man of unfailing courtesy and great integrity, Cohen consistently demonstrated his clarity and strength of argument. He never resorted to guile or invective, and made no enemy in the parliament. Although he was a member of the left faction of the A.L.P., he was respected as a healer and as one who endeavoured to achieve consensus. After addressing an election meeting in Adelaide, Cohen collapsed and died of cardiac infarction on 7 October 1969 at Queen Elizabeth Hospital, Woodville; he was accorded a state funeral and buried in Melbourne general cemetery. His wife and two daughters survived him. A portrait by Louis Kahan hangs in the Hebrew University of Jerusalem; another by the same artist is in the family’s possession. In 1970 Cohen was posthumously given the Maurice Ashkanasy award for Australian Jew of the Year (1969). A Senator Cohen memorial lecture was established; the first was delivered by R. J. L. Hawke on 6 October 1971.

Sort by dateSort by name
DescendingAscending

Hon. Clyde Holding MLA, Leader of the Australian Labor Party in the Parliament of Victoria, 1975

As I write this foreword to Clyde Holding’s 1975 Sam Cohen Memorial Lecture, this country is embroiled in an election campaign made bitter and divisive by extraordinary and undemocratic actions never before known in Australia. I take no smug satisfaction from prophetic words I used towards the end of the 1971 Inaugural Sam Cohen Memorial…

Sam Cohen was a fine Parliamentarian, lawyer, socialist, member of the Jewish community, husband and father, and all round gentleman. He was eloquent and persuasive in debate, and possessed among his many attributes that rare skill – especially rare, we Labor right-wingers would say, in a man of the left! – as a builder of…

When we gather together two years after the death of Sam Cohen to do honor to the memory of a man so widely and deeply loved, no doubt each of us who had the privilege of knowing him personally is unconsciously asking the question — what of all his qualities is the one for which…