Reflections on the passing of Bob Hawke 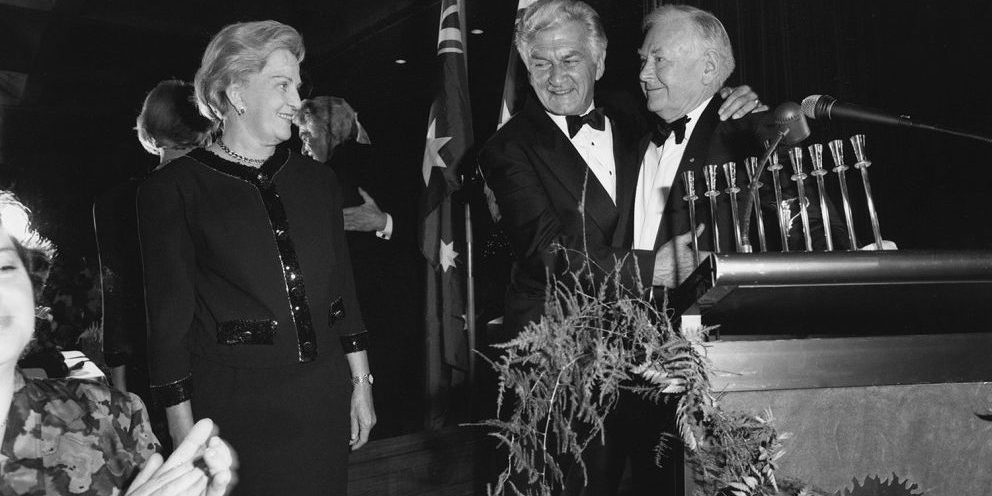 ACCORDING to his biographer Blanche d’Alpuget, who subsequently became his wife, for Bob Hawke: “Israel – sung about, spoken of, yearned for – glowed as a portentous presence at the heart of spiritual life.” As many have recorded, having visited Israel for the first time in 1971, he then immediately developed an uncanny affinity with the prevalent mood of the typical Israeli – his or her irreverence, informality, combined with ability to overcome obstacles – all very similar to the Australian character.

D’Alpuget records that two features of his Israeli visit touched Hawke at a very deep level. One was his first impression of Jerusalem: He came upon it suddenly, rounding a bend in the mountain road. He recalled: “The physical impact of Jerusalem on me was almost, in the literal sense, indescribable. It captured so much of my background, my knowledge of the Bible (his father was a minister) … I don’t know how often I’ve been there since but every time I have felt a thrill as the car rounds the brow of the hill and there it is.”

The other was his visit to Yad Vashem that he left in tears, deeply and permanently moved by what he saw. Having earlier been impressed with Israel since his days with the International Labour association, he associated with many Histadrut trade union officials and was given red carpet treatment by Israel’s leaders, especially Golda Meir, with whom he had what a friend described as “a platonic love affair”.

Following his return he gave the first Sam Cohen memorial lecture, during which he enthralled listeners by reading Elazar ben Yair’s speech to the fighters on Masada – that fighting and death with freedom was preferable to subservience to the Romans or any other power than God himself. He saw a direct line between those fighters against Rome and contemporary Israel.

He developed a passionate commitment to Israel, becoming its foremost non-Jewish supporter among Australian public figures. In 1973 he became the most outspoken supporter of Israel during the Yom Kippur War, explicitly publicly attacking Whitlam’s “even-handed” policy. He gave numerous pro-Israel speeches and came into direct conflict with the extreme left in Victoria, especially extreme left anti-Israel advocate of the Palestinians, unionist Bill Hartley. (In 1985 he would succeed in having Hartley expelled from ALP.)

Hawke’s 1983 election as prime minister raised Jewish expectations. In 1982 during the Lebanon war ALP policy (in opposition) had leaned more and more heavily against Israel. In the context of his deeply held views encouraged by lobbying by Jewish leaders, Hawke’s influence kept such tendencies away from official policy.

Following president Chaim Herzog’s 1986 visit, in January 1987 Hawke made the first visit to Israel as prime minister. Honoured with the degree of Doctor of Philosophy from the Hebrew University, he urged Israeli and Palestinian leaders to work together towards peace. Having once again emerged emotionally affected from a visit to Yad Vashem, he also pledged to pursue Nazi war criminals as far as possible.

Since the late ’70s, influenced by Isi Leibler, Hawke had adopted the cause of Russian Jewry, especially the refuseniks. In visits to Moscow, as well as other formal communications, he had forcefully pressed for their release – even to the extent that some in Australia such as Professor Geoffrey Blainey expressed concern that he was pursuing minority interests at the expense of Australian foreign policy.

And then, in May 1988, came “the night to remember” when a capacity audience of 3000 at the Melbourne Concert Hall welcomed 15 refuseniks with whom Hawke, who had met them in Russia, was now ecstatically reunited. Speaking after receiving the Human Rights Award from the Australian Institute of Jewish Affairs he pledged to continue the efforts of the Australian government on behalf of Russian Jewry. And despite a discordant note arising from his comparison of the sufferings of Jews in Russia, black Africans and Palestinians, his close relationship with the Jewish community continued, extending to function attendance, speeches and school visits where he loved to sit with pupils and discuss politics – on occasion humbly acting as a political science teacher for a lesson.

At a Jewish community tribute in 1992 that followed his cessation in the prime ministerial role the previous year, Israel’s ambassador to Australia Yehuda Avner, said there had sometimes been differences and arguments over the years between Mr Hawke and Israel. “But never for one moment did we doubt the sincerity of your purpose, of the passion of your feeling for the good of Israel.” And in reply Hawke noted that despite changes in the world over: “My commitment to Israel has been a central, unambiguous non-negotiable fact of my life. And it always will be.”

In response, communal personality Saul Same presented Bob and Hazel Hawke with a silver menorah. Of course that was far from the end of Hawke’s relationship with Israel and our community – but it does bring me to the last occasion on which I personally saw him.

Hawke was well aware of Same’s unwavering love of the Labor Party, always valuing his advice. And so it was no wonder that for the Shloshim tribute to Saul Same in May 2016 at Elwood Shule, a now elderly Hawke specifically made the journey from Sydney to Melbourne, just to be there with the Jewish community that he loved so much while honouring his friend that he had once introduced to the Queen as the “most honourable man in Australia”. Humbly and without fanfare he entered the shule and just sat down in a pew near the entrance paying attention to the proceedings.

Such was the man so close to our community, whose memory is indeed blessed.