The Visit to Israel by Victorian State Labor MPs 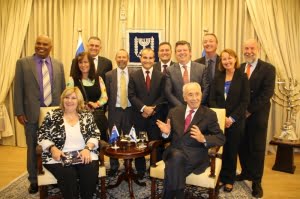 At a function celebrating the return of 9 Victorian ALP State Parliamentarians from a recent study mission to Israel, Deputy Labor Leader, Hon James Merlino MLA, said that he understood and believed that “Israel is a triumph of the human spirit.” Merlino talked about the mission as confronting, beautiful, sobering and fascinating. He said a highlight was a 45 minute meeting with Israeli President, and past Labor Prime Minister, Shimon Peres. Another highlight with powerful impact on the visitors was a visit to the Yad Vashem Holocaust Museum, and the Group’s participation in the Israel Yom Hashoa Service –  the official Israeli Public Commemoration of the Holocaust. 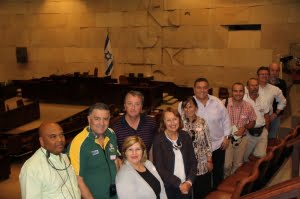 James also said that an important message he received from Israeli politicians and entrepreneurs was to look at Israel not just through the prism of security, but through the eyes of it’s people. The Group toured Ben Gurion University in the south and the Haifa Technion world-class technology hub in the north.

The Group also toured the Palestinian Authority in Bethlehem, and met senior Palestinians within the Authority. Merlino’s impressions and assessments were sobering.

While difficult to see a way forward, Merlino remained positive for the prospects of peace, especially after meeting with Peres.

Overall the Group felt the Mission was a trip of a lifetime, and they will remain form friends of Israel.