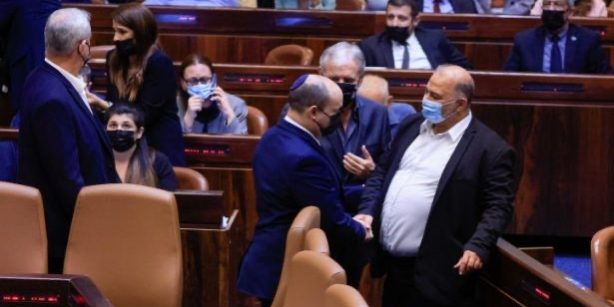 Jewish-Arab political partnership isn’t doing so well in June 2022. But by and large we are heading in the right direction.

And there is a partner.

First for some good news. Every day that passes since the formation of the current coalition normalises a situation in which Arab political representatives – with Palestinian identity – are part of the government. Arab citizens have entered into the political community in Israel – a nightmare scenario for the far right.

Yet it is both happening and getting stronger – and each day the political system, the media, and the public become more used to the presence of Arabs in power. What was once perceived as abnormal has become normal and routine. It is changing social and political norms. It will be very difficult to turn the wheel back. That’s the first piece of good news.

The second piece of good news is that it’s not just the political reality that has changed. Not since the abrupt change in Israeli public opinion regarding peace with Egypt and the withdrawal from the Sinai has there been an issue on which such a rapid and positive change has taken place in public opinion as the issue of including Arab parties in the governing coalition.

Over the last two years, aChord centre carried out a series of polls for Have you seen the horizon lately and Shatil on the Jewish and Arab public’s positions regarding political partnership.

We found that amongst Israeli Jews support moved from a state of almost total opposition on the right, a majority opposed among the centre and majority support amongst the left (in February 2020), to the following situation (in March 2022): within the centre there is now a clear majority supporting political cooperation with Arab parties (42 per cent support, 30 per cent object, 28 per cent undecided); within the left this is now an almost consensus issue (80 per cent support); a large majority of centre left voters (over 60 per cent) support political partnership with all the Arab parties; on the right meanwhile there is almost 25 per cent support. It’s inconceivable but that’s the situation. And all this upheaval happened within two years.

This data shows that the delegitimisation project against political power of Arab citizens – which was Netanyahu’s main project – has collapsed. Ironically (and happily), Netanyahu’s government collapsed with it.

This decrease can be explained by the strong opposition of the Joint list to the government and the acts of the government in the occupied territories against the Palestinians. Yet among Arab voters there is still a majority of supporters for Arab parties being part of the coalition.

The third piece of good news relates to the political leadership and most importantly the Israeli centre. Yair Lapid, the centre’s candidate for prime minister, has completely changed his position – from resolute opposition to the partnership of an Arab party in power to public support for the government in support of the Joint List. Even in recent weeks, in different interviews trying to extract from him a statement of opposition to partnership with the Joint List he has refused to rule out this option.

Not only is an Arab party part of the government, but the government is actually functioning pretty well. While facing huge coalition difficulties (as did many previous governments) it functions 10 times better than previous ones: it has passed a budget, restored trust in state institutions, and restored working relations within local government, conducted effective policy against basic problems (such as crime in Arab society) and more. And no less important, instead of inciting and dividing between different groups within Israeli society it has conveyed unifying messages.

Thus, the success of Jewish-Arab political partnership has three aspects: (a) an issue that was on the fringes of Israeli political discourse, which received widespread opposition from the public and left-wing / centrist leaders – has now entered the heart of the discourse (b) it has won the support of the centre-left public and leadership and (c) has ‘produced’ a normal government.

Meanwhile, the discourse is flooded with messages like ‘the experiment collapsed’, or ‘the Arab parties are not built for government and responsibility’ etc. This is completely untrue! Coalition crises occur often and have caused the collapse of many governments. This ‘experiment has collapsed’ discourse is not only wrong but very harmful because it can lead quickly to the ‘no partner’ conclusion (this time in the domestic Israeli version) and cause the same amount of enormous damage as did the ‘no partner’ concept regarding the Palestinians (following the collapse of the Camp David Summit in July 2000). It is forbidden to cooperate with this discourse.

The alternative – a right-wing government led by Bibi – could bring terrible disaster on all of us, including the Palestinians, so it is good that the current government continues to exist.

Despite this, these could be the last days of the current government. In order to continue it will likely need support (or at least abstention) from the Joint List in a vote to dissolve the Knesset. The chances for this are low due to the Joint List’s refusal to support a government led by the right-wing and the right wing’s refusal to rely on the support of the Joint List. Only a rare act of leadership by Bennett, Lapid, Ayman Odeh and Ahmad Tibi, based on an agreement not to topple the government in exchange for significant steps towards Israel’s Arab citizens – both civil and national – can save the current government. The chances for this are small but not impossible.

At the same time, it is important to note that the current government’s Jewish-Arab political cooperation is far from being the ultimately desired one due to three reasons:

First, it is a partnership in a government that continues to deepen the occupation and to do daily harm to the lives, property, lands, rights, and dignity of the Palestinians. This is a stain on the current government. The truth must be stated: the current political partnership has failed to curb this, and that is its greatest weakness.

Second, the United Arab List (UAL/Ra’am) is using its current place of power to weaken the Joint List, which constitutes a more progressive and liberal part of Arab politics. Unfortunately, it does so also by echoing the right’s false claims that the Joint List does not act on behalf of Arab citizens.

Third, we should pay attention to this frightening (possible) scenario: UAL has already shown that it is willing to partner with the most racist forces in Israel by its readiness in April 2022 to join Netanyahu, Ben-Gvir and Smotrich in an extreme right wing government. Despite all incitement from Netanyahu since the current government was established on all interviews in these days Mansour Abbas, the leader of the UAL has refused to say that he ruled out supporting a future Netanyahu government. This means that the UAL can potentially join a right-wing coalition in the future thus place a significant portion of Arab Israelis’ political power in the service of extreme right-wing government for years to come. This terrifying scenario should keep leaders of the centre-left up at night, motivating them to act urgently to build a bridge between their camp and the Joint List – in addition to UAL rather than in place of it. In an article in Haaretz earlier this year I suggested a plan how to build this bridge.

The only way to initiate a move to end control over the Palestinians in the territories, achieve peace and promote a more just society within Israel, must be through a political partnership between the Jewish centre-left and the country’s Arab citizens. The abrupt change in public opinion on the issue of joint Jewish-Arab partnership perhaps provides hope that such a change can also happen on this issue.

A partnership between the Jewish centre-left and Israel’s Arab citizens would be one based on a government entering into negotiations with the Palestinians in order to try and achieve a peace deal. It would be similar to the political partnership in the days of Rabin and the Oslo Accords, in which the government was prevented from falling by the Arab parties – led by Tawfiq Zayad providing a blocking majority (I wrote about Zayad here).