Some Background to Events in Jerusalem, Dr Adam Carr 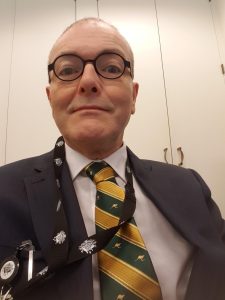 In 1875 some pious Jews bought some land in a semi-rural area just north of Jerusalem, which was then a small town largely consisting of the Old City and a few suburbs to the west. The land was the site of a tomb believed to be that of Shimon HaTzadik, a rabbi of the 3rd century BCE. (Archaeologists believe the tomb is in fact from the Roman period.) The Ottoman land register showed that the property was registered in the names of rabbis Avraham Ashkenazi and Meir Auerbach. A small religious Jewish community lived there.

Also in this area was the tomb of Hussam al-Din al-Jarrahi, physician to the Arab leader Salah ad-Din (Saladin). His tomb dates from 1202 and was a site of Muslim pilgrimage. The area was known as Sheikh Jarrah after him. (The Jews called it Shimon HaTzadik.) In the later 19th century, as Jerusalem grew rapidly under the economic stimulus of Jewish settlement and investment, an Arab suburb grew up around the Jewish-owned property. Jews and Arabs lived together, if not exactly in friendship, at least in peace.

It’s important to note that these Jews were not Israelis and not Zionists, and that their Arab neighbours were not Palestinians. In 1875 political Zionism did not exist (Herzl published “The Jewish State” in 1896). Israel was a name from the Bible. Palestine was a name from the Roman Empire. Jerusalem was located in the Ottoman Empire, in the province (vilayet) of Syria. There was no conflict between Jews and Palestinians, because there were no Palestinians. Ottoman south Syria had a mixed population of Muslim and Christian Arabs, Jews, Turks, Armenians, Circassians, Druze and others. If we had visited Jerusalem or Jaffa or Ramallah in 1875 and asked people “what are you?”, not one of them would have said “I am a Palestinian.”

Fast-forward to 1948. When the war between the emerging State of Israel and the five neighbouring Arab states ended, the Israelis held western Jerusalem, while the Jordanians held the Old City and the suburbs to the north and east, including Sheikh Jarrah. All the Jewish residents were expelled, their synagogues demolished and their cemeteries destroyed. We now tend to think of the Jordanians as among the “moderate” Arabs, but they were far from moderate in 1948. No Jew would be allowed to live in Jordanian territory. In 1950 Jordan annexed the territory under its control, including eastern Jerusalem.

Note that although all this territory had been part of the Palestinian Mandate, and had also been part of the Arab state proposed by the UN Partition Plan of 1947, Jordan did not establish a Palestinian state in the land it controlled after 1948, nor did anyone demand that it do so. No resolutions were passed at the UN demanding that Jordan end its occupation of “Palestinian land.” Although a Palestinian Arab national identity had formed after the establishment of the Mandate in 1922, there was still no widely recognised “Palestinian nation”. The Arab inhabitants of the West Bank and eastern Jerusalem were thus Jordanians between 1950 and 1967 and seem to have been quite happy with that status.

Under Jordanian rule, the Jewish-owned properties in and around Jerusalem were placed under the control of the Custodian of Enemy Properties. In 1956, the office of the Custodian leased the property at Sheikh Jarrah to 28 Arab families who had been displaced during the 1948 war. The Custodian retained ownership of the property, and the Arab residents paid rent to it. None of the Arab families living on the Jewish-owned property at Sheikh Jarrah has ever owned any of it.

Forward again to 1967. King Hussein foolishly joined in the war between Israel and Egypt, and as a result the Israelis swiftly occupied all Jordanian territory west of the Jordan. Jerusalem was re-united under Israeli control. Israel passed a law allowing Israelis whose families had been evicted by the Jordanians to reclaim their property, provided they could demonstrate proof of ownership, and provided also that the existing residents were unable to provide such proof of purchase or legal transfer of title.

After 1990, however, incited by the Palestinian leadership, the tenants stopped paying rent and began unapproved building on the property. They thus violated the terms of the agreement which they had signed in 1982. In 1993, the Jewish trusts began proceedings against the residents based on their non-payment of rent and illegal changes to the property. Since the Arab tenants have full access to the Israeli courts, and also have access to funds to hire good lawyers, and since the Israeli legal system is notoriously slow, these proceedings dragged on through various courts for some years. In 2003, the religious trusts sold the property to Nahalat Shimon, an Israeli NGO that seeks to reclaim property for Jews evicted after the 1948 war. This body has since had carriage of the court case.

In October 2020 the Jerusalem Magistrates Court ruled that, in the absence of payment of rent, the Arab tenants must vacate the property. In February this year the Jerusalem District Court upheld the decision. The tenants appealed to the Supreme Court, whose final verdict expected in the next month.

The Palestinian Authority has used these proceedings as a pretext to launch anti-Israeli rioting in Jerusalem, which has spread to other centres. The riots have given Mahmood Abbas a handy excuse to cancel (again) promised election to the Palestinian Authority presidency and legislature, which were last held in 2006. Abbas knows that his Fatah party would lose any free election in the Palestinian Territories, as they did in 2006. The riots are also convenient for Prime Minister Netanyahu, who can use them as an argument for why he should stay in office despite having lost the March election. This is presumably why some right-wing Jewish groups in Jerusalem have joined in the rioting by provoking the Arabs to further violence.

Most of the world’s media has once again uncritically accepted and repeated the Palestinian version of events, either in ignorance of, or with disregard for, the historical facts of the dispute which I have set out here. We are told that this is a story of the brutal Israeli occupation forcibly evicting innocent Palestinian families from their ancestral homes. In fact, the Israelis have shown quite astonishing restraint and compliance with the law. If they had wanted to evict the Arabs at Sheikh Jarrah by force, they could have done so at any time since 1967. Instead, 54 years later, the matter is still being litigated. This is remarkable considering that Jewish ownership of the property was acknowledged in writing by the Arab residents in 1982, and that their non-compliance with the 1982 agreement is undisputed.