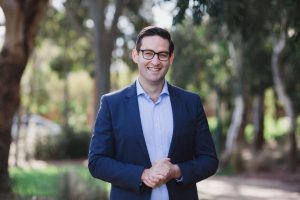 I’ll begin my remarks by talking about my grandfather, who was in Israel at its early inception in 1948 and then lived on a kibbutz with my grandmother in the 1950s. They were one of the first generations of people who were trying to turn a barren desert into a country. My grandfather was an extremely good man and he was a kind man, and he told me a story about his time in the 1950s in Israel. It was a story of an unfortunate conflict that happened between him and his Arab neighbours, and he was shattered by it. He didn’t want to raise my father in an area where there was going to be this ongoing conflict between the Israelis and the Palestinians, and he said he made the hardest decision of his life: to leave Israel and to find a new place to live. And, even though he lived his life in Australia—and he was a proud Labor man and he was really proud that I was, at the time, working for the Labor Party—he was always sad that he couldn’t make his life in Israel. It was a huge part of who he was. He’d just watched the Holocaust happen in World War II, and he was shattered by the state of the Jewish world. It is just one example of one family that is deeply connected to its own identity.

To understand the Middle East is to understand individuals; it’s to understand their spirituality; it’s to understand their connection to a land that literally formed the three Abrahamic faiths that have dominated our civilisation for the last 2,000 years. To understand the Middle East and to talk about the Middle East, you have to do it delicately and respectfully, and you have to do it, I believe, in a way that aims to seek peace and aims to seek a cooperation and a future where people come together. And it is my dream to see peace between the Israelis and the Palestinians. There are very few things I want to see more in my lifetime—other than to see my daughter grow up to be happy and healthy—than peace between the Israelis and the Palestinians. It is one of the great bits of unfinished business of our species, of humankind.

I regularly meet with Palestinian advocates here in Australia, and I will continue to do so. We don’t always agree on everything, but we have honest conversations, and I value them and the fact that they stand up, and we hope to see a better future.

On the topic of Jerusalem: it is a deeply contentious issue. The former government started a process before a by-election, and didn’t end up moving an embassy, and promised to recognise West Jerusalem. It doesn’t actually encapsulate the old city of Jerusalem—the famous old city where you’ve got the Armenian, the Islamic, the Jewish, and the Christian quarters and the part of Israel that is so deeply rooted in the holiness of all of the different faiths; that’s actually in East Jerusalem. And if you were to ask an Israeli whether that’s part of Israel or not, it would be inconceivable for an Israeli to say that that’s not a part of their capital.

I recognise the fact that those opposite are coming at us for reversing their decision. But, actually, the policy that they proposed was not welcomed in Israel. It was a deeply contentious one that removed a deeply spiritual part of Israeli identity. And I don’t say that to be holier than thou at this point in time—on the contrary: I think we need to be humble when talking about these issues. I say it to say that the Middle East is complex and, when coming to these debates, we must tread carefully and lightly, for our role, as Australians, in this region is to play a constructive role in order to achieve peace. That is our role. And to promise matters that you don’t deliver on, four days before a by-election, is not the way—nor was it, to be honest, to deliver a policy on Simhath Torah. That was a mistake, I believe, that we needed to own, and we did own, and I apologise again to the people in my electorate.

It’s hard to explain how people in Macnamara would be feeling, but I’ll try to, just very briefly. For those people, to understand Jerusalem as the capital is as simple as us understanding Canberra as the capital of our country, and it would be like someone telling us that Surfers Paradise was the capital instead of Canberra—something that doesn’t really make sense. I know that this is a final status issue, and I don’t say this to demean the positions of those on the other side of this contentious debate; I’m just trying to give a perspective on what people are experiencing in my electorate and how difficult this would be for them to digest.

So I come to this debate and say that I hope we have better days ahead. I hope deeply that we find, in my lifetime, a resolution to this long and protracted conflict and we see peace between the Israelis and the Palestinians.

Decision by the Government of Australia to withdraw recognition of Jerusalem as the capital of Israel, Peter Khalil MHR, Chair of Parliamentary Joint Committee on Intelligence and Security, Parliament of Australia, 25 October 2022