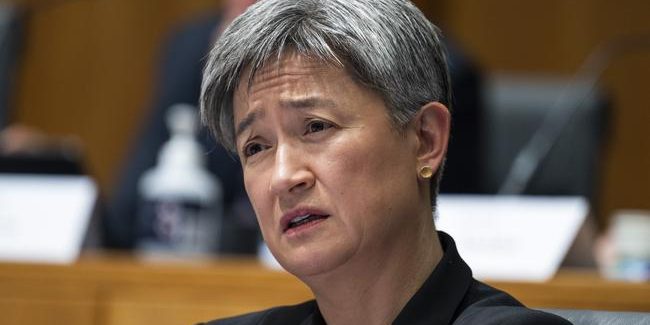 Penny Wong says viewing the Israeli-Palestinian conflict from one perspective ‘will not ­advance the cause of peace’.

Senator Wong said viewing the Israeli-Palestinian conflict from one perspective “will not ¬advance the cause of peace”.

“It will take leaders recognising their respective roles in the cycle of escalation and conflict – and returning to meaningful ¬dialogue and negotiation – for a just and enduring peace to be achieved,” Senator Wong told The Australian.

Her comments come after a resolution accusing Israel of ¬“ethnic cleansing” won the support of a majority of delegates at Queensland Labor’s state conference on the weekend.

The branch, which is dominated by the Left faction, also ¬accused Israel of being solely ¬responsible for the recent conflict in Gaza, which it said was “sparked by the forced evictions in Sheikh Jarrah to remove Palestinians from their homes and replace them with Israeli settlers”.

The resolution “condemns” ¬Israel for a number of disputed ¬accusations, including the “ongoing Israeli annexation by stealth of Palestinian land” and the “ethnic cleansing of Palestinians through the expansion of ¬illegal settlements”.

The resolution also “recognises” the “routine oppression and dehumanisation of Palestinian people, denying their dignity and rights to self-determination (and) condemning them to live under perpetual Israeli occupation”.

Adam Slonim, the co-convener of the Australia Israel Labor ¬Dialogue, said the resolution passed on the weekend ¬“demonises Israel and creates a double standard that no one else is held to”. Mr Slonim warned that there was a growing strain of anti-¬Semitism within the ALP and the broader public.

“We are very disappointed that the Labor Party in Queensland blamed Israel entirely for the ¬recent conflict,” Mr Slonim said.

“We find that terms such as ethnic cleansing demonstrate the anti-Israel bias of many of those who support the motion. Those who are working towards a two-state solution negotiated at the end of the conflict will be very disappointed in what occurred.

“When you see a motion like this that demonises, delegitimises, doesn’t discuss at all the 4300 rockets fired by Hamas on Israeli citizens … when you have these ‘three Ds’ you are moving from anti-Zionism to anti-Semitism.”

“Queensland Labor is doing the ALP and the Palestinian people a gross disservice by propagating these falsehoods,” Mr Leibler said. “Australia has a role to play in helping Israel and the Palestinians resolve the conflict, but that role will only be constructive if Australia is an honest broker.

“By peddling lies like ethnic cleansing and the other furphies in the resolution, Queensland Labor are sowing doubt among the Australian public as to whether Labor could act honestly in this role, and this does a disservice to the many in Labor who genuinely want Israelis and Palestinians to build a peaceful future together, not at the expense of each other.”

Federal Labor in March for the first time recognised the state of Palestine in its national platform, despite strong opposition from some members of the party’s Right faction.