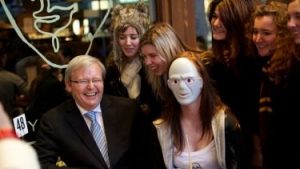 Order number in hand and a copy of The Age tucked under his arm, Kevin Rudd sat down for a hot chocolate in the afternoon on a Melbourne city street.

But his choice of cafe was no accident – rather, it was a deliberate statement of support for a company targeted in a political boycott of Israel.

”As an individual citizen – that is me, K. Rudd – I am here because I object to the boycotting of Jewish businesses,” he said.

Max Brenner Chocolate Bar in the QV building was the scene of a nasty protest a fortnight ago, with 18 people arrested while rallying outside the store over the occupation of Palestinian territories.

An international campaign for sanctions and boycotts against Israel has targeted the Max Brenner chain, accusing it of tacit support for the occupation.

Mr. Rudd was swamped by a group of schoolgirls asking for a photo with the ex-PM, though none of the girls – including Brighde McGrath wearing a mask – knew about the boycott calls.

Samah Sabawi from Australians for Palestine said Max Brenner was a legitimate target for the boycott, even though her organisation did not take part in protests.

She said moves to pass a law in Israel making boycotts illegal had only created confusion and called on Mr. Rudd to take a wider view.

”I think Kevin Rudd has not given Palestinian civil society a good hearing,” Ms. Sabawi said.

Mr. Rudd said the laws Israel passed were a matter for Israel, but Australia had historically supported a two-state solution to the conflict.

“Any lasting resolution to the Middle East conflict cannot be at the expense of either Palestinians or Israelis.” – Interview by The Australian Jewish News with Hon. Anthony Albanese MHR, Deputy Prime Minister of Australia, 11 July 2013
Latest News
Go to Top