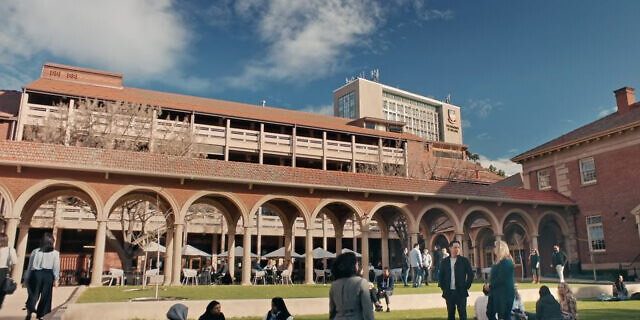 In April 2022, the University of Melbourne Student Union (UMSU) passed a motion denouncing Zionism as a “racist, colonial ideology”, despite concerns raised from Jewish students about what such a motion would mean for their welfare on campus. The motion was later rescinded and a consultation process with student groups began. However, just this week UMSU ignored that process and disregarded the concerns of Jewish students, and passed an almost identical motion.

In Australia, we are incredibly fortunate that physical attacks aimed at Jewish institutions and violent assaults against visibly Jewish people are rare and, when they do occur, are outrightly condemned. For the most part, I feel safe walking down the street wearing a Star of David around my neck, confident I will not be accosted or assaulted.

Things aren’t quite that way on campus, however. For example, while attending my political science classes, it’s not unusual for my fellow students, upon seeing my Star of David necklace, to ask my opinion about the state of Israel. This can be an uncomfortable experience, especially when the standard established by student councils is that anyone who believes in Jewish self-determination in the land of Israel is a proponent of a “racist” and “colonial” ideology, and that they are thus not welcome on campus.

When most people think about what antisemitism looks like on university campuses, they might envision angry young men marching by torchlight and chanting “Jews will not replace us”. Yet the common experience of being Jewish on campus is not that of being confronted by the far-right. More often, it looks like having our Jewish identities put on trial in supposedly “progressive” spaces — like a classroom. While this is not necessarily an expression of antisemitism, it does belong in that long lineage of tropes by which Jews have been unrelentingly “othered” — tropes that can easily give way to full-fledged Jew-hatred.

From the blood libel to global dominance, Jews have been the centre of conspiracy theories. From England to the Middle East, we have been kicked out of nations and regions. From Capitalism to Communism, we have been the forces driving it. From the far right to the far left, Jews are the cause of all ills. The common denominators are the concepts of power and control. Just because these days the word “Jew” is exchanged for “Zionist” does not make the tropes themselves any more defensible.

When a student says they don’t feel welcome in a club on campus because of their ethnicity or race, everyone is quick to call that out (and rightfully so). But when a Jewish student at the University of Sydney feels pushed out of the queer collective because they are Zionist, it is not met with the same outcry.

If a student publication publishes an article that says “Death to the Jews”, that would ring alarm bells. But when On Dit, the student magazine of the University of Adelaide, publishes an article which concludes with the words “Free Palestine and Death to Israel”, it hardly raises an eyebrow.

If “f**k Judaism” graffiti is spotted on campus, then people would understand why Jewish students feel unwelcome, but when “f**k Zionism” was written on the walls of the University of Melbourne, it was not called out with the same disgust.

When a student council passes a motion attacking Zionists but squeezes in a line about condemning antisemitism of all kinds, how much reassurance are Jewish students meant to feel when they continue to encounter the kind of hostility I’ve just described?

The distance in the minds of many students between the conventional perception of what constitutes “antisemitism” (think Nazis or white supremacists) and its modern-day manifestations (like student magazines that read “Death to Israel”) enables them to dismiss or otherwise disregard the concerns expressed by their Jewish peers.

The unfortunate reality is that contemporary expressions of antisemitism are more common than most people like to think, and the classic tropes are far more disguised. It does not matter whether one identifies as an “anti-Semite”; not aligning with the conventional characteristics of antisemitism does not make one immune from spreading or enabling antisemitic rhetoric.

We have all seen how antisemitism has been narrowly defined and Zionism is misrepresented to fit certain “progressive” agendas, while Jewish voices are largely ignored. We have heard the perpetuation of antisemitic tropes, followed by an obligatory “but, of course, I condemn antisemitism of any kind …”

Thankfully, there is a simple way of not enabling or perpetuating antisemitism. Listen to Jews. This is easy to say, but apparently far harder to do. Jews are, after all, not a homogenous bloc. Active engagement with the Jewish community, trying to understand the history and nuance of the Zionist identity and the diversity that exists within Jewish spaces, and being willing to amplify our voices when it comes to tackling antisemitism, is not something we should have to beg for. But on campus, it is crucial.

The modern-day manifestations of antisemitic tropes within progressive spaces means that many people seem not even to be aware they are enabling antisemitism. When antisemitism is framed as a partisan issue that falls on either side of an ideological spectrum, you place Jewish students in the crossfire. This culture does nothing to hold the perpetrators of far-right antisemitism to account nor call out the antisemitic dog-whistles which have become embedded in “anti-Zionist” discourse.

I believe that it’s time to normalise listening to and believing Jews. When we say something is antisemitic or that the UMSU motion scares us, it is not because we want to stifle criticism about Israel, but because we are frightened when we see thousand-year-old antisemitic tropes multiplying around us.

Alissa Foster is the Vice President of the Australiasian Union of Jewish Students, the peak representative body for Jewish students on campus across Australia and New Zealand. She is also a student at the University of New South Wales studying a Bachelor of Arts majoring in Politics and International Relations, and a Bachelor of Media.