You are here:
The Apartheid Myth 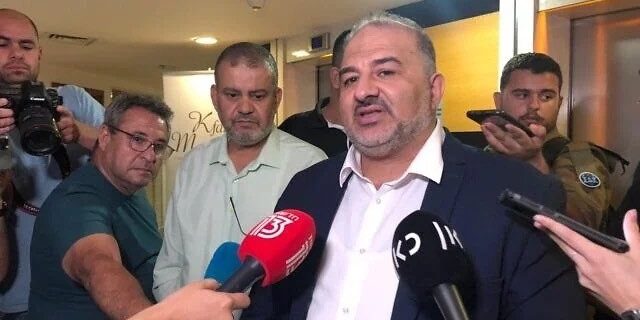 The first Arab party to join a government in decades, Islamists make good on promise to seek change from inside, winning billions in promised state funding for community.

Ringed by flashing cameras in a luxury hotel in Ramat Gan, conservative Islamist Ra’am chief Mansour Abbas made history on Wednesday night as the first Arab Israeli party leader in half a century to sign a deal to sit in a coalition government.

“This is the first time that an Arab party is part of the process of forming a government. We of course hope that it works and that a government will rise after four rounds of elections,” Abbas said.

Even before Ra’am announced it was signing on, the nascent coalition was widely regarded as the widest in the country’s history, uniting parties from the left to the pro-settlement right aimed at deposing Prime Minister Benjamin Netanyahu and his Likud faction.

Despite the wide spectrum of views in the so-called “change government,” Abbas said that he had agreed on numerous plans and budgets in Arab Israeli society with his counterparts in the constellation of parties seeking to topple Netanyahu.

“We have reached a critical mass of agreements in various fields that serves the interest of Arab society and that provide solutions for the burning issues in Arab society — planning, the housing crisis, and of course, fighting violence and organized crime,” Abbas said.

Abbas promised that many of the benefits would flow to the Negev region in southern Israel. Ra’am’s base is among the traditional Bedouin communities in the Negev desert.

Ra’am said that the so-called change bloc agreed to over NIS 53 billion ($16.3 billion) in budgets and government development plans for Arab society.

According to a statement by the Islamist party, Bennett and Lapid pledged NIS 30 billion over five years in unspecified economic development funds, as well as another NIS 2.5 million ($770,000) to fight violence and organized crime in Arab society.

Another NIS 20 million ($6 million) will be invested over the next 10 years to fix crumbling infrastructure in Arab cities and towns, Ra’am said.

Three Bedouin unrecognized villages — Abda, Khashm al-Zena, and Rakhma — are set to be legalized in a government decision, according to Ra’am.

The party said it also won the coalition’s agreement to discuss amending the controversial 2017 Kaminitz law, which targets illegal Arab construction and is widely viewed by Arabs as discriminatory. In the meantime, a decision already in place to freeze parts of the law will be extended until 2024.

Abbas said that Ra’am had signed the agreement last, waiting until other holdout parties, including Naftali Bennett’s Yamina, had also signed.

For decades, Arab Israeli parties have almost always remained on the outside of the decision-making process in Israeli politics. Jewish parties shunned them as extremists, while they themselves were often skeptical of joining an Israeli government they deem treats them as second class citizens and oppresses Palestinians.

Under Abbas, Ra’am in recent months began to blaze a different path, openly working with Netanyahu’s government. After leaving the Joint List of Arab parties, Ra’am ran alone on a platform of being willing to affect change from the inside by being open to joining a government, with the goal of achieving tangible policy advancements for his community.

That included being willing to join right-wing Yamina leader Bennett, who opposes the creation of a Palestinian state and has long been identified with the settlement movement.

“For decades, Arab Israelis have been without any influence. Now, everyone knows that we’re the deciding votes as far as politics goes,” Ra’am lawmaker Walid Taha told a reporter for the Arabic-language channel Hala TV.

Only twice have Arab Israeli parties backed an Israeli government. In the 1950s, a small faction composed of one Arab parliamentarian entered the coalition. The faction was far from independent, essentially operating as an Arab franchise of Israel’s ruling socialist party, Mapai.

In the 1990s, when the government of left-wing Labor party leader Yitzhak Rabin was in danger of collapsing, the Arab parties stepped in to prevent a vote of no confidence.

But mainstream Arab parties have begun to push in recent years to support a center-left government so as to topple Netanyahu. As recently as March 2020, the Joint List hoped to use its 15 MKs to bring Blue and White chief Benny Gantz into power.

Facing uproar in his own camp over the prospect of being supported by the Joint List, Gantz instead gave the Arab bloc the cold shoulder and entered a feeble coalition agreement with Netanyahu, a decision he would later publicly lament.

The nascent government’s embrace of Ra’am remains enormously controversial among parts of the Israeli right, including among Bennett’s own constituents.

Hundreds of protesters gathered outside of a Ramat Gan hotel where the negotiations were being conducted to call for the change bloc’s right-wing parties — such as Yamina, New Hope, and Yisrael Beytenu — to withdraw. Demonstrators held signs telling the parties “not to make a government with terror supporters.”

“How can this government defend us from the Iranian nuclear threat?” went another sign held by a right-wing protester.

Some in Netanyahu’s camp were skeptical that the change bloc’s various promises to Ra’am would come to fruition.

“This is all empty talk. It’s lies. What did they get? Just political games,” seethed Likud MK Fateen Mulla in a phone call with The Times of Israel.

The political wing of the southern branch of the Islamic Movement in Israel, Ra’am is guided by a deeply conservative Islamic ideology and holds a virulently homophobic outlook. Its lawmakers also have pro-Palestinian views; the party’s charter supports a right of return for Palestinian refugees and deems Zionism “racist, occupier thought.”

But in late 2020, Abbas astonished Arab and Jewish Israelis alike when he began seeking closer ties with Netanyahu, a figure many Arab Israelis say has incited against them.

Abbas invited the prime minister to address a Knesset committee he directed, supported him during a contentious parliamentary vote and in exchange sought to extract public commitments from Netanyahu for the Arab community’s legislative priorities.

“There’s only one premier, and that’s Netanyahu. He is the address for these demands,” Abbas told The Times of Israel in December.

After months of increasingly public infighting, Abbas left the Joint List in early February. Many commentators speculated at the time that the Islamists would not receive enough votes to pass Israel’s election threshold. The Joint List, originally composed of three Arab parties as well as Ra’am, has been the main force in Arab Israeli politics since it was formed in 2015.

His goal was clear: To cross the election threshold and become a kingmaker. Israeli politics is currently dominated by two opposing blocs — one supporting Netanyahu and the other opposing him, a rubric which has come to replace political ideology in how parties are seen; most parties’ loyalties to either bloc were well-defined before the elections, with only Ra’am and Yamina refusing to commit to either side.

Abbas pitched Ra’am to voters as a genuine free agent which could wield enormous leverage in deciding the election one way or the other. The party’s iconic green posters described it as “a conservative, influential and realistic voice.”

In a surprising turn of events, the March 2021 election delivered Ra’am four mandates, making them the largest single Arab party in the country. The Joint List’s three parties received a total of six seats in the Knesset, split among them.

More importantly, the coalition math made it highly unlikely that a government could be formed without the Islamists.

Netanyahu repeatedly denied seeking Abbas’s support during the electoral campaign. But after the elections delivered him a nearly impossible situation, he was said to hope to form a government with Ra’am’s support nonetheless.

The long-serving prime minister’s efforts were stymied, however, when Ra’am and the far-right Religious Zionist party both ruled out sitting with one another in a coalition. Netanyahu was unable to bring potential partners in the center-right over to his side, and the mandate passed to Yesh Atid leader Yair Lapid.

Many Ra’am voters would likely have preferred Lapid rather than the hard-right Naftali Bennett. The coalition negotiations were also further complicated by growing violence in Israel, the West Bank and Gaza.

In early May, Israel Police clashed with Palestinian worshippers in the Al-Aqsa Mosque, the third-holiest site in Islam, and at Damascus Gate wounding hundreds with rubber-tipped steel bullets.

While police said they acted to prevent a riot, many Arab Israelis saw it as an assault against Muslim sovereignty on the flashpoint Temple Mount hilltop, which is also Judaism’s holiest site.

Tensions also rose over the pending eviction of Arabs in Jaffa and in the East Jerusalem neighborhood of Sheikh Jarrah. Their homes were expected to be filled by right-wing Jewish nationalists.

When open warfare broke out between Israel and Hamas and mob violence rolled through Arab-Jewish mixed cities, Ra’am temporarily froze the ongoing attempts to join the government in an attempt to wait things out.

But even at the height of the chaos, Ra’am party officials close to Abbas remained optimistic that as soon as the events died down, the negotiations would resume.

By the time Abbas arrived in at the Kfar Maccabiah hotel to conclude negotiations on Wednesday night, Ra’am’s participation in the coalition was already nearly a done deal.

“The most important thing is to arrive at a point where we can achieve what we want,” Abbas said.